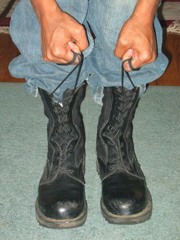 God is our refuge and strength,
always ready to help in times of trouble.
Psalm 46:1

A friend of mine said to me this morning, “Nancy, every time I think I have myself pulled up by my bootstraps, someone comes along and unties them!” I started thinking about what she said and thought, “Now that would make a great theme for a devotional! (You know the Lord gives me ideas in the most unusual ways.)

First I looked online to see if I could find the origin of the saying…perhaps some old proverb or witty Southern quip. But the dictionary of phrases said that it had no specific origin. However, the meaning is quite clear. It means “to improve one’s position by one’s own efforts.” It refers, of course, to boots and their straps (laces or pull tabs on Cowboy Boots) and to the imagined feat of lifting oneself off the ground by pulling on one’s own bootstraps. This impossible task is supposed to exemplify the achievement in getting out of a difficult situation by one’s own efforts. It is a great source of pride in this country to say that someone pulled themselves up by their own bootstraps. It usually means that they came from a very humble background and made a place for themselves in the world.

My father was such a man. He grew up very poor. He told of going to school with ragged clothes and no shoes and getting in many a fight because his classmates made fun of him. He told about his mom cooking green apples because there was no food in the house. His father was very irresponsible and to put it mildly had no work ethic. My father quit school at the age of fourteen to work in the coal mines to help provide for his mom and siblings. But because he had such a difficult start in life, he determined that when he had a family of his own, he would never allow them to want for any necessary thing. He kept that promise. He literally worked day and night to provide for our family. I am a third child and by the time I came along, we lived in a nice brick home on 130 acres of land. We were not rich, but we were definitely not poor. I never knew any of the want he suffered. He truly “pulled himself up by his own bootstraps.”

But sometimes because of the circumstances that life affords us, we are not able to do it alone. I have always been a self-sufficient person. I think it was ingrained in me by my father. But there have been times in my life when I just couldn’t make it on my own. As a matter of fact there have been times when I couldn’t even make it with the help of others. I needed supernatural help! I needed the help of my Heavenly Father! The chorus in a song I wrote in one of those difficult times says:

And thank the Lord…He IS a God of miracles! The Bible is full of people who tried every means known to man to solve a problem to no avail. Then they called on Jesus! One man brought his son who had seizures to the disciples for help, but they couldn’t help him. Then he called on Jesus. Jesus said, “Only believe. All things are possible to those who believe.”  The man replied, “Lord, I believe. Help my unbelief!” Even when we don’t think we have enough faith, we can depend on His faith. And He is always faithful to help us in our time of need. If someone has untied your bootstraps, call on Him. He can help when no one else can!