But they that wait upon the Lord shall renew their strength;
they shall mount up with wings as eagles; they shall run,
and not be weary; and they shall walk, and not faint.
Isaiah 40:31

As I was having my devotional this morning, for some reason the song entitled “Wind Beneath My Wings” came to mind and I started singing it. When I got to the line, “I can fly higher than an eagle…for you are the wind beneath my wings”, I started thinking about my relationship with the Lord and how it relates to that particular line.

I pictured myself first as a baby eagle learning to fly. Sometimes my tiny wings would tire as I struggled against the elements that surrounded me. I would start to panic as I felt my strength failing and my altitude decreasing. But right in the nick of time, despite my state of chaos and lack of confidence, I felt a strong presence underneath me, supporting me in my weakness, carrying me completely as I shifted the weight of my burdened breast onto the back of the mother eagle.

What an awesome picture of our Father God! He covers us with His feathers. (Psalm 91:4) He upholds us with His Righteous Right Hand! (Isaiah 43:10) Though we fall seven times, He will lift us up again! (Proverbs 24:16) Just like that mother eagle, He watches over us even when we are not cognizant of His presence.

Then we grow and mature and strive to become eagles in our own right…strong in the face of adversity, soaring above the storms of life, resting in the strength of His love. We don’t always soar, however. Sometimes we let the storms overtake us. Sometimes we allow the highwayman of our faith to rob us of our rest and waylay our hope. That is when we need the the blessed Holy Spirit to be the “wind beneath our wings.” Jesus knew we wouldn’t always be strong. He knew that we couldn’t make it alone. That’s why He said that The Father would send us a helper in the form of the Holy Spirit. “And I will ask the Father, and he will give you another advocate to help you and be with you forever—But the Helper (Comforter, Advocate, Intercessor—Counselor, Strengthener, Standby), the Holy Spirit, whom the Father will send in My name [in My place, to represent Me and act on My behalf], He will teach you all things. And He will help you remember everything that I have told you.” (John 14:16,26 AMP)

Whether you are soaring today or whether you are still in the stages of learning to fly, the Holy Spirit is there to empower you. He will be the “wind beneath your wings.” You don’t have to struggle in your own strength, for sometimes it’s just not enough. Ask the Holy Spirit to bring a strong current of the Lord’s grace and lift you above the circumstances that are trying to make you earthbound. Relinquish the care to Him and you’ll find yourself unburdened and mounting up with wings like the eagle, strong and soaring! 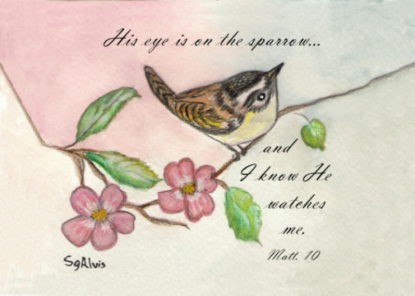 SONG: YOU CAN MAKE IT

What is the price of two sparrows—one copper coin?
But not a single sparrow can fall to the ground
without your Heavenly Father knowing it.
And even the very hairs on your head are all numbered.
So don’t be afraid; you are more valuable to God
than a whole flock of sparrows.
Matthew 10:29-31 NLT

Do you feel valuable? If you’re like me, it probably depends on what day you’re asked. Some days I feel valuable and some days I feel somewhat worthless! But know this…You are ALWAYS valuable in the eyes of your Heavenly Father. Matthew gives us a vivid illustration of how much we mean to God.

I can’t imagine how many sparrows there are in this world. When I checked the dictionary, one classification alone had 140 species. And there are several different classifications all over the world. But Matthew tells us that our Heavenly Father knows when even one of them falls to the ground. He also tells us again in chapter six to “Look at the birds. They don’t plant or harvest or store food in barns, for your heavenly Father feeds them. And aren’t you far more valuable to him than they are?” (Matthew 6:26) If the Lord feeds the little sparrows and keeps up with their coming and going, how much more will He take care of us, His children?

I don’t think anyone put it more succinctly than Peter. “Cast the whole of your care [all your anxieties, all your worries, all your concerns, once and for all] on Him, for He cares for you affectionately and cares about you watchfully.” (I Peter 5:7-9 AMP) Read that verse again slowly, emphasizing the word “all”…and make it personal. Lord, I “Cast the whole of my care [ALL my anxieties, ALL my worries, ALL my concerns, once and for ALL] on You, for You care for me affectionately and care about me watchfully.”

You are valuable to your Father God! And if He is caring for you, why should you take the care also? Cast it on Him today!

Take delight in the Lord and He will give you
the desires of your heart.
Psalm 37:4

Our God is such an awesome God! I am ever amazed at how He cares about the smallest things in our lives. Sometimes I think to myself, “Lord, you must think I am so silly at times. I can obsess about the most trivial things!” But no, if it’s significant to us, it’s significant to Him. That’s how much He loves us.

Think about a small child. Many times, something very trivial to us is so important to them. When they start looking for their favorite blanket to sleep with, do you say, “You don’t have to have that! Just lay down and go to sleep.” Of course not! You tear the house apart if necessary to find it for them. That’s how much you love them. Why would our Heavenly Father be any different? Do you feel childish at times about the things you desire? You ARE a child! You are HIS child!

Now don’t get me wrong, Our Father is not going to do something just because we desire it if it would not be good for us or harm us in the end. But you know the difference and so do I. Let me give you the perfect example. (It’s another one of my cat stories! I have many.)

I have several feral cats who have grown up at my house. Their mother is wild and she either had them on my covered back porch or brought them there shortly thereafter. I have fed her and them since that time. On occasion they allow me to pet them very briefly, but are still very wary of any human presence. As they are now grown, I did not want to have an influx of wild kittens running around. So I figured the humane thing to do would be to take them to the Spay and Neuter Clinic. But the problem was, since they wouldn’t willingly go into a carrier, I had to catch them in a trap in order to take them. That in itself was not an easy task! But with much perseverance and patience I was able to trap the mother and two females and take them to the clinic. When I brought them home I kept them in my guest bathroom for about three days where I talked to them, petted them, fed them and provided bathroom facilities (a litter box). Now what cat, wild or tame, wouldn’t be completely grateful for such royal treatment! But as soon as I let them outside again, they were gone with the wind! Never mind that I had spent my hard earned money to try to give them a better life. Forget the fact that I had tried to bond with them and nurture them back to health. What ungrateful creatures! I was upset, frustrated and hurt at their indifference. (I know…weird, right?)

Several weeks after their disappearance, I was feeling particularly down one day about something totally unrelated that had transpired in my life. And when you’re down, you start pondering everything else sad that you can think about…for me, it was the cats. Where are they? Are they okay or has some wild animal eaten them? (I live in the country.) Do they absolutely hate me now? (Silly, silly…AND sillier.) At that point I was looking to the Lord for comfort and said, “Lord, please bring the cats back. I really miss them and I need to know if they are okay.”

I was driving home from work at the time. When I turned the corner of my house, I saw Fluffy standing on the steps waiting for me. When I went out to the back porch, there was Midnight too. But where was Cherise, my favorite? I don’t see Cherise! (My daughter-in-law thinks that’s a hilarious name for a cat!) At that moment, Cherise came crawling out of a nearby box. After several weeks of no-show, they were all there. We were united once again! (A little drama for effect!) A little thing…even a silly thing to most people, but not to My Father. He cares about me and everything that touches my life. He cares about you too! Never doubt it! Delight in Him and He WILL give you your heart’s desires, even if it’s just bringing your cats home.